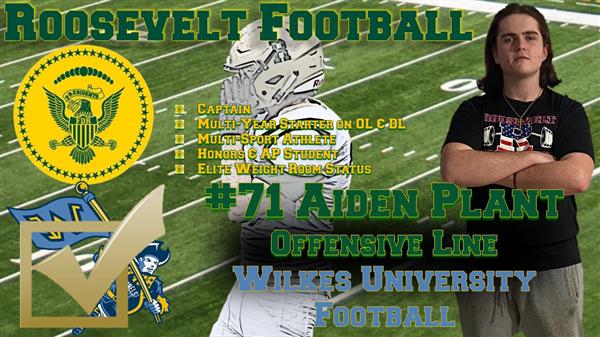 Congratulations to FDR student-athlete Aiden Plant, who recently committed to attend Wilkes University in the fall and will join their football team, while majoring in business.

Aiden began taking accelerated and high school classes as a student at Haviland Middle School, allowing him to challenge himself with advanced placement and college-level courses starting in his sophomore year at FDR.  Upon graduation in June, he will leave FDR with a number of college credits.

As a two-sport athlete, Aiden has been a member of the FDR varsity football and varsity lacrosse teams since his sophomore year.  On the football team, he has been part of the offensive line and defensive line.  While he is a skilled athlete, Aiden is particularly proud of having been recognized by the New York State Public High School Athletic Association (NYPHSAA) as a Scholar-Athlete during each season that he has played a high school sport.

In addition to being a strong student and athlete, Aiden is also a leader.  He is the current captain of the FDR football team and was selected to participate in the prestigious Boys' State program, a week-long program sponsored by the American Legion that immerses high school youth in citizenship and leadership training.  He is involved in FDR's music program and is the leader of the percussion section of the wind ensemble.  Aiden has also been inducted into the National Honor Society (NHS).  In the community, he referees youth basketball in the Regina Coeli CYO program and also holds a part-time job.

When asked to reflect on his FDR experience, Aiden identified the sense of community as being most influential to him.  He is not only grateful for his friendships with his classmates and his teammates, but also for the relationships he had with the teachers, staff, and coaches who supported him.

The Hyde Park Central School District is committed to providing a website that is accessible to the widest possible audience, regardless of technology or ability. If you use assistive technology and have trouble accessing information on our website, please contact the Hyde Park Schools Webmaster at the following e-mail address: helpdesk@hpcsd.org. When requesting assistance via e-mail, please write &#39Accessibility' in the subject line. If you are hearing-impaired and use a teletypewriter (TTY), you can contact us at 845.229.4004 (Monday-Friday, 8:00 a.m.- 4:00 p.m.) for assistance.
Copyright © 2002-2021 Blackboard, Inc. All rights reserved.