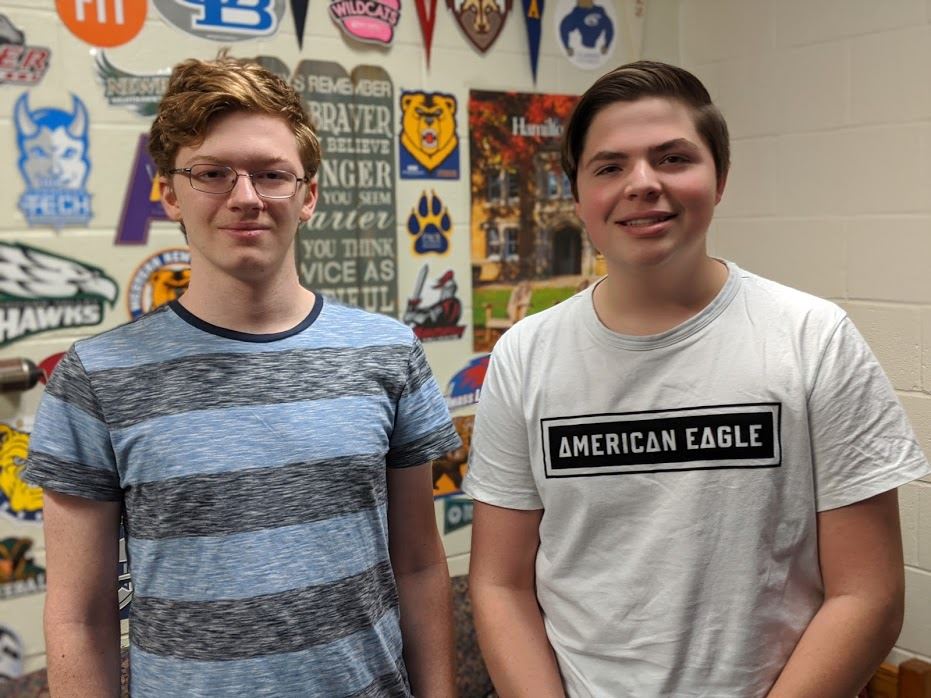 Cameron and Matthew worked together to create an app called "PaniChat," which can be used by adolescents to remove themselves from uncomfortable situations and peer pressure.  In his press release, Congressman Delgado stated, "The app looks like the user is playing a game, but surreptitiously opens a chat box to contact family and friends."  Cameron noted, "So if you're at a party and feeling pressured to drink, you can take out your phone and it will look like you're playing a game, but you can text your mom to pick you up."

As winners of the Congressional App Challenge, Cameron and Matthew will travel to Washington D.C. to meet with Congressman Delgado and will join winners from other congressional districts to present their app to other elected officials.

ABOUT THE CONGRESSIONAL APP CHALLENGE (CAC)
"The Congressional App Challenge is the most prestigious prize in student computer science."

The Congressional App Challenge is sponsored by members of the U.S. House of Representatives.  It is open to middle school and high school students, encouraging them to learn to code and inspiring them to pursue careers in computer science.  Every year, members of Congress challenge students in their home districts to create and submit their original apps for a chance to win the Congressional App Challenge (CAC). Each challenge is district-specific.  The U.S. Representatives publicly recognize winning teams and each winning app may be put on display in the U.S. Capitol Building for one year.

The Congressional App Challenge's Mission is to inspire, include, and innovate efforts around STEM, coding, and computer science education.

ABOUT CAMERON JOHNSON & MATTHEW SWEET
Cameron Johnson is currently a senior at F.D. Roosevelt High School.  His courseload has included advanced math classes, advanced physics classes, and technology classes.  He has also taken a number of classes associated with the Project Lead The Way (PLTW) program, including Design/Drawing for Production, Computer Science 1, Computer Science 2, Computer Science/Java, and Computer Science/Python.  He is interested in studying computer science or videogame design in college.  In his free time, Cameron enjoys creating apps, playing videogames, walking his dog, and working at Panera Bread.

Matthew Sweet is currently a senior at F.D. Roosevelt High School.  He started taking accelerated classes in middle school, where he earned high school credit for Algebra I and Spanish 1.  Throughout his time at FDR, he has successfully completed a number of honors classes, advanced math classes, and classes awarding college credit.  Perhaps most notably, Matthew has taken classes offered through the Project Lead The Way (PLTW) program, including two courses in engineering, one course in computer science/Java, and a course in computer science/python.  He plans to attend college to study computer science.  In his free time, Matthew enjoys bowling, spending time with friends, and working at Dairy Queen.

The Hyde Park Central School District is committed to providing a website that is accessible to the widest possible audience, regardless of technology or ability. If you use assistive technology and have trouble accessing information on our website, please contact the Hyde Park Schools Webmaster at the following e-mail address: helpdesk@hpcsd.org. When requesting assistance via e-mail, please write &#39Accessibility' in the subject line. If you are hearing-impaired and use a teletypewriter (TTY), you can contact us at 845.229.4004 (Monday-Friday, 8:00 a.m.- 4:00 p.m.) for assistance.
Copyright © 2002-2020 Blackboard, Inc. All rights reserved.